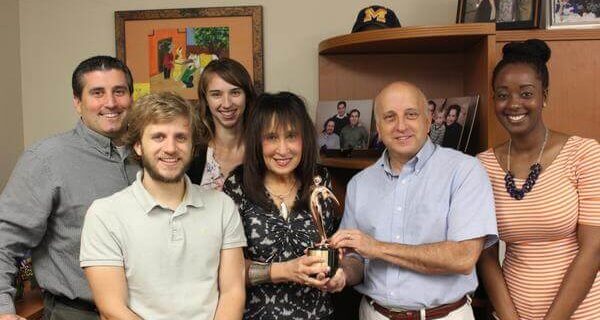 Did we tell you we won some more Telly Awards?

I’ve been reading several tweets and blogs about the various Telly Awards being handed out, when I realized, “Hey, we won some Telly Awards, too! Maybe I should tell someone about them…” So without further ado, I’m pleased to announce that this year we won a Silver Award (which is actually the highest honor), for our film “Welcome to the Neighborhood.” This now makes “Welcome to the Neighborhood” our most award winning film, so far. Watch the hilarious Doug Powell, and the über talented Claire Hadley and Allie Heidel as they show you that even the strangest people have something to offer.

In addition to our Silver Award, we won a Bronze Telly Award for our documentary called “Making the Ordinary Extraordinary” for the Jewish Foundation for Group Homes. Watch JFGH resident, Jeremy Wittes, as he tells the story of the JFGH and their last thirty years.

Here we are presenting the award to the JFGH team.

We are so proud of our team that works hard to make these award winning, engaging films. We hope you enjoy them!