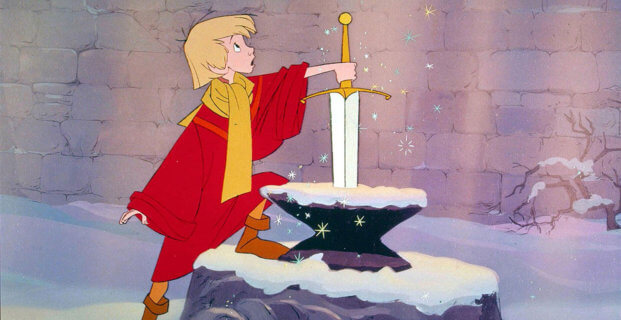 Sword in the Stone: Remakes & Reboots We Actually Want To See (2)

The Sword and the Stone

In spite of the heaps of Arthurian adaptations, we have no doubt that this tale will never stop being retold.  The nature of the story is so simplistic, yet so complex and so mystifying that there will always be another interpretation lurking within.  The most recent film version, Guy Ritchie’s — shall we say stylized? — version, King Arthur: Legend of the Sword, depicts the boy king’s origin… except for rearranging the family tree, altering timelines, redistributing magical powers, and giving us an all-grown-up Arthur that frees Excalibur (while being yelled at by David Beckham).  Legend of the Sword is, if nothing else, a loosely-inspired approach.  One of the refreshing aspects was, in fact, seeing the iconic imagery of the sword in the stone.  When was the last time an Arthurian film/book/graphic novel (in the mainstream media) utilized this part of the story so specifically?

For many of us, Disney’s The Sword in the Stone (1963) is a childhood favorite, but around here, we would still be very keen to see T.H. White’s book adapted for a modern audience.

Though, perhaps without quite so much CGI?

In the meantime, head over to the Myths & Legends Podcast for an awesome series on King Arthur and Merlin.