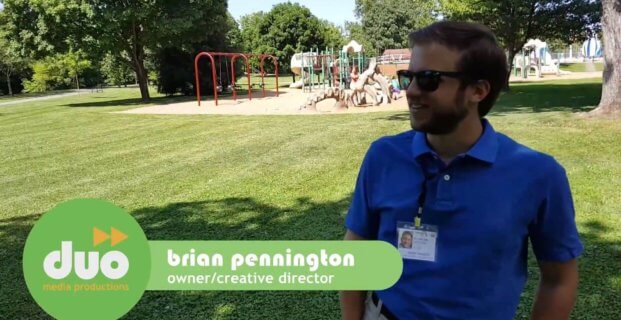 From elaborate, sophisticated studio production and hurdling across the full breadth of downtown Frederick, to fundraisers and Blu-Ray menus, June 2016 was one of our busiest – and most productive! – yet.

As we mentioned last month, the “Floyd Series” has become one of our biggest and most expansive projects.  Our client, SOLIDWORKS, has continued to give us a great deal of creative freedom to explore unconventional approaches to their video marketing.  The Floyd Series started at the end of 2015 with It’s No Secret, in which Floyd (played by Kevin Brennan) is introduced.  Since then, he has appeared in A Game of CAD: A Song of Design and Engineering, Floyd Prepares for Dallas and SOLIDWORKS World Wrap-Up video (coming soon).  We’ve been developing a series of additional videos, which were far more ambitious than any that have come before; but we like a creative challenge!  We brought Jason Krznarich onto the team to lend his expertise to creating the vastly complex system needed to pull off our vision. We rented the space at BlueRock Productions & Studio (Baltimore, Maryland) to shoot two of the three videos.

Later that same week, we went on location to downtown Frederick, Maryland, starting and ending in Baker Park, but traipsing just about everywhere in between.  This video was shot entirely on a GoPro, with additional help from Jason and Brian himself.

Though difficult, all these shoots were big successes and we’ve been in post production since, delighted to see how the efforts are paying off.  We can’t wait to share the finished product.

SOLIDWORKS was not the only project we were working on this month.  The Foundation to Fight H-ABC hosted a fundraising event this month, for which the Manor Country Club hosted rounds of tennis and golf, a silent auction, great food and live music.  The proceeds are all going to research for a cure to H-ABC and the benefit of other rare diseases as well.  Check out the video below: