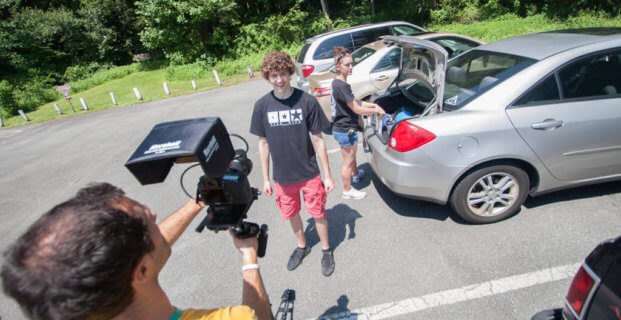 How to Be a Good Production Assistant (Part 1)

As I started to write this blog, I quickly realized this was going to be a lengthy one, so I decided to split it up into several parts.  This will be an ongoing series that I’ll update anytime I find new material to share.

I’ve often said that film schools should really have an entire class on how to be a good Production Assistant (PA).  My first real job in the industry, outside of independent films, was working for Nickelodeon as an Intern (where I then got hired as a Production Assistant) to the Associate Director.  This meant I got to do a lot of cool stuff like be a part of the team in the control room during the live broadcast every day, squeegee slime off the soundstage floor after each show (that’s cool right?), greet celebrity guests, and tag along with the head honchos when they wanted to go ride The Mummy, (did I mention this was at Universal Studios?).  But I also had to do a lot of not so fun stuff, like go on $800 Costco runs by myself, pickup and check every lunch order for accuracy, and make sure I used the same font style and size for every document I printed.  In all honesty, I loved every cool thing I got to do, but I’m even more grateful for all the tedious tasks, heavy lifting and endless trips to and from Starbucks, carrying a dozen various sized drinks by myself through the park dodging tourists and strollers.  At the time, I didn’t know that I was training under one of the toughest Production Managers in town, but it certainly helped prepare me for the future.

As a Production Coordinator, myself and part-owner of DUO Media Productions, I have a few things I’d like to share about How to be a good Production Assistant.  Here comes part one.

Have a willing attitude.

When I was a PA, usually the PA’s that complained a lot didn’t get called back very often.  Now, as a Production Coordinator, I’m much more willing to teach someone who might not know much about any department as long as they’re willing to learn and to try.  I can’t tell you the number of times I’ve gotten eye rolls, sighs or mumbles of complaint when I ask someone to be on “fire watch” (that means to stay behind and watch the gear while everyone else goes to lunch or elsewhere), or when I’ve asked them to be on “lockdown” which usually means to stand outside of a door, away from the camera and lights to keep people from entering or making a lot of noise.  Just do what you’re asked to do with a good attitude and a smile and next time maybe we’ll bump you up to something better and get someone else to be on fire watch.