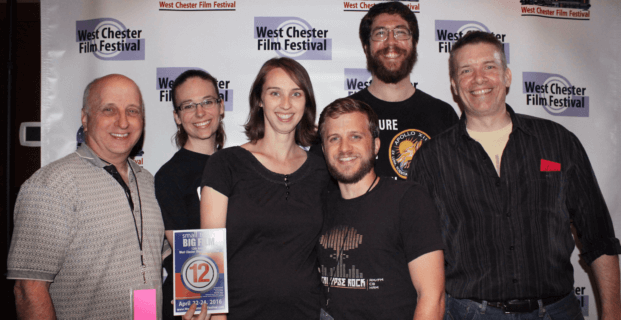 April 2016 was a big month for DUO!  We hired our first full-time employee, received the green light on a series of marketing videos for one of our most valued clients, hit the road for a local film festival, made great new connections, launched a new collaboration with marketing firm, ArachnidWorks, competed in and completed the 48 Hour Film Project for Washington, DC.

At the end of March, we hired our first full-time employee, Robin Farrell, who has joined our team as editor and writer.  We couldn’t be happier to expand our team as our company grows.  We started the “Floyd Series” for our client, SOLIDWORKS, at the end of 2015 with It’s No Secret and Floyd (played by Kevin Brennan) became the new face for SOLIDWORKS World promos.  SOLIDWORKS gave us the chance to stretch our creative muscles by making a Mockumentary (Floyd Prepares for Dallas) and an Epic Fantasy Trailer (Game of CAD), both of which were big hits.  After a successful SOLIDWORKS World 2016, we’re moving forward with another series of videos, starring Floyd and we’re excited to promote SOLIDWORK in such a unique way.

Mid-month, we headed south for the West Chester Film Festival, where our film, Apocalypse Rock was nominated for – and won! – Best Comedy.  We also nearly snagged the H. Paul Fitzpatrick People’s Choice Award as runner-up by the closest margin of votes in the entire twelve-year history of the festival.  Check out the other award winners here!

We received so much positive feedback from the film and made great new contacts.  In particular, Vishwas (The Visit) and Connor Gabe (Snap Shot), both of whom joined us the following weekend for the DC 48 Hour Film Project.  We were delighted, as well, to be joined by Allie McFadden (Distilled, Welcome to the Neighborhood, Denouement).  We came in with a small, but strong team this year; wish us luck at the public screening this month – and hopefully make “The Best of the Fest!”