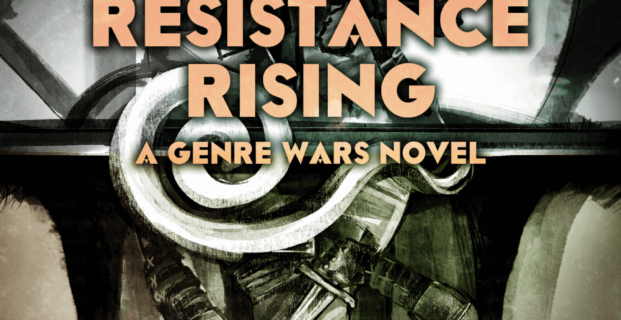 I’m delighted to share a personal achievement: my book!
I have self-published Resistance Rising: A Genre Wars Novel.  Check out the book trailer below:

The Oniyum has vanished. War has come to Kabathan, a planet of nations inspired by different genre types. When Reman, a fast-advancing pilot for the Mech Republic is sent deep into Fantasarian territory – alone, surrounded by the acrid smell of Magic – he gets ambushed, taken captive, and confronted with a question that will challenge everything has ever known.

It started with Ron Newcomb‘s online short film competition (Genre Wars), back in 2012.  Justin Moe and myself developed Genre Wars: Resistance Rising, a stand-alone web series (currently in post-production) and I have now adapted the story, the screenplay, into the novel.

The story grew from the contest premise; that there’s an object that shapes the world and it vanishes.  I was fascinated by the idea that our characters, rather than the characters going off on a quest to find it or finding it (i.e. David Eddings’ Belgariad series) and then having to decide what to do with it (i.e. The Avengers or Harry Potter) or being forced to destroy it (i.e. The Lord of the Rings), they instead turn to one another and determine what to do in its wake; how do we move forward from here?

I’m touring the book where and when I can, mostly locally, and taking promotional opportunities as they come.

Read more about the journey in an author interview with writer and fellow bookworm, Barbara Brutt.
You can sample the First Chapter and/or purchase Resistance Rising, in paperback or eBook.

<< Previous: Frederick County, A Great Place To Do Business | Next: Travel Tips >>