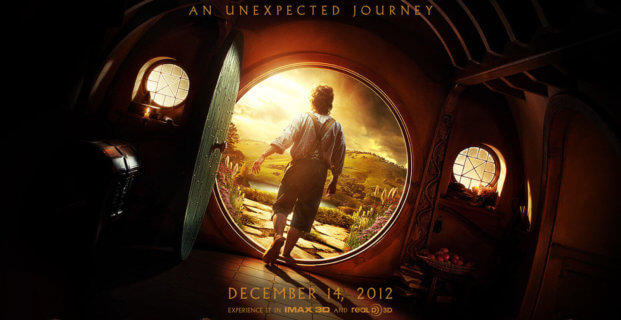 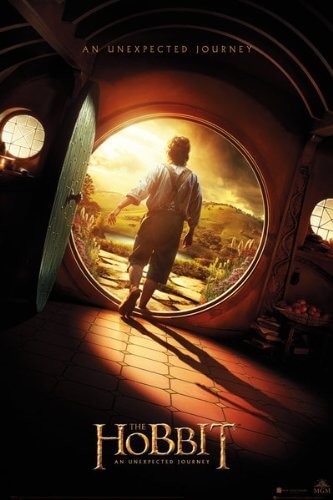 Much like the other dedicated fans of fantasy and cinema, I played hooky to catch Peter Jackson’s “The Hobbit: An Unexpected Journey” on its opening day.  Columbia Mall’s AMC 14 was the only theater in Maryland showing the epic prelude in the innovative 48fps (frames per second), so it was there I headed amidst the hustle and bustle of the approaching Christmas deadline.  Consequently, it was also an “IMAX” screening (IMAX being in quotations due to the screen falling far short of IMAX’s once standard screen size of 72 ft x 52.8 ft) and in 3D.  So, for better or worse, I was in for the Peter Jackson approved and preferred method of viewing his latest film: big, smooth, and in 3D.

The opening credits rolled, along with a re-mastered 48fps version of the MGM lion roaring; an apéritif, if you will, of the kind of motion we were to expect in the following 3 hours.  I won’t lie; my initial knee-jerk to the opening scenes was to lean over to my wife and whisper, “This can’t be calibrated correctly.  It’s playing too fast!”.  Like a timeline in an editor played back at 2x the normal speed, characters seemed to be humorously racing through their actions.  I’m certain my reaction was largely due to the type of shots the film opened with, and in essence introduced me to 48fps: extreme close ups of characters’ hands interacting with items.

In film school, one of the first things you learn is when an actor is interacting with an item that the camera is closely framed on, you must tell the actor to move at 50% speed or the result will appear “too fast” on film and the audience will miss what happened.  When Bilbo Baggins reaches for and removes the quill from the ink well and begins to write in the opening moments of “The Hobbit”, it all appears inhumanly fast.  I thought to myself, “I couldn’t do that same action at that same speed in real life without overturning the inkwell and spilling ink all over my page.”  And therein was my biggest issue with the 48fps format.  Regardless, if 48fps is, in fact, mathematically closer in speed to a human’s movement, if people on screen appear to possess super human dexterity, the connection to reality is severed.

A colleague of mine put it quite perfectly as such, and I paraphrase: what Peter Jackson essentially did was design a film for 24fps and film it in 48fps.  He directed actors the same way he would have in 24fps.  Sets were built and costumes designed like they would have been for a 24fps film.  The DP Andrew Lesnie designed shots and camera moves like he would for a 24fps film.  Everyone did what they do best, like they had always done it.  And then 48fps was sort of decided on in the name of a few perks relating to 3D and the theory of cinema.  Perhaps filmmaking needs to be approached fundamentally differently if one desires to film in 48fps, much like you would never approach making a 3D film like you would a 2D one.  What are those changes to be made?  Perhaps if this frame rate trend continues, each department can slowly learn the tools and tricks for this new format and once again refine the craft.  I especially think James Cameron must proceed cautiously if he intends to make good on his promise to film Avatar 2 in 60fps.

I’ll end with a final thought, and my biggest issue with 48fps.  The battle cry heard across the filmmaking world was 48fps greatly reduces the motion blur that occurs in 24fps when either the camera pans quickly or an actor or object quickly crosses the frame, and as such greatly reduces the strain on the viewer’s eye when the film is viewed in 3D.  Well, if removing blur was the goal, the mission was a success.  I’ve never seen a sharper and more flawless image in all my life of going to the movies.  But is sharpness really a desirable effect in storytelling?  It may come down to preference, but allow me to make my case here.  Anyone who has been hit in a sports game by a fast moving ball or has looked out the window of a car knows that our eyes view fast motion as a blur.  Motion blur is how our brain tells us “Wow.  That was going fast.”  In “The Hobbit”, there is a scene where rock giants are throwing large boulders against the mountain walls.  Rubble shatters and flies every which way at tremendous speeds.  Every piece is crystal clear, even as it rockets through the scene.  However, because your brain can easily see everything coming in sharp focus, it almost seems to negate the motion as “fast”.  A quick, dark blur across the scene, followed by a loud crack and a rain of tiny rocks shattering across the frame would have been much more exciting and scary than a projectile you register several seconds before it collides near the characters.  Humans are not used to perceiving the amount of information and clarity 48fps provides, and I’m not even referring to cinema alone but to all of life and human experience.

It’s easy to be a naysayer in the early days of any new advance to cinema (I think of talkies in the 20’s), and I in no way plan on stubbornly planting my heels against this new medium.  These complaints I raise to challenge and educate the community of filmmakers and to get an honest discussion going.  Technology for technology’s sake has never worked.  We gain nothing by automatically giving 48fps a pass/fail.  We need to be objective and put it through rigorous tests.  I firmly believe any technological advance will easily succeed if it helps magnify and support the most important aspect of filmmaking: the story.